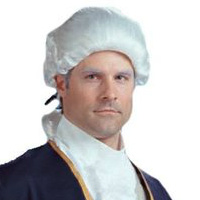 Mr. George Washington became the first official President of the United States of America, building a strong foundation for the country. Acting as commander in chief during the Revolutionary War (1775–1783), he helped lead the Americans to win independence from the British Empire. This great man also helped draft the United States constitution in 1787 and was officially elected by the public in 1789 (winning 100 percent of the electoral votes) to become the US President. He served for two terms and refused to run for a third term. President Washington played a huge role in the birth and success of the country. For this reason, this historical figure remains to be a very popular costume character for both children and adults for patriotic events and celebrations!

George Washington's Birthday is February 22nd so if you like to celebrate our first President of the United States, you can consider dressing up like him to honor his patriotism.